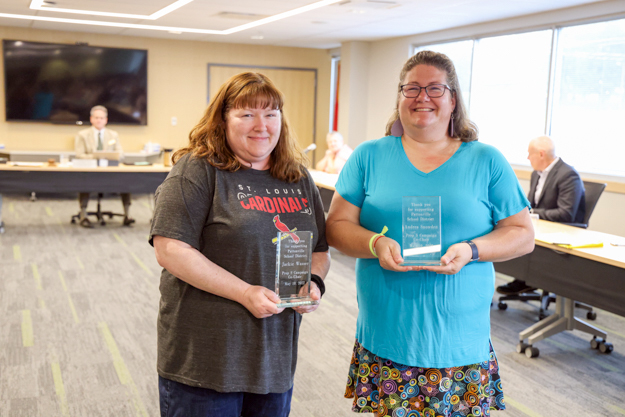 The Pattonville Board of Education held a special recognition on May 10 to honor and thank two parent volunteers who led an effort in support of the district’s $111 million no-tax-rate-increase bond issue on the April 5 election ballot. Parents Andrea Snowden and Jackie Wasser co-chaired the volunteer campaign for Prop S. Pattonville voters approved Prop S by 79.4%, the highest approval rating of any school measure in the state during the April 5 election, according to Dr. Tim Pecoraro, superintendent. Approximately 57.14% was required for the measure to pass.

The bond issue will fund projects at every school in Pattonville, including adding classrooms to address growth in student enrollment; providing safety and maintenance improvements; and updating school facilities to meet teaching and learning needs. Approval of the bond issue did not increase the district's tax rate.

Pattonville began planning for the bond issue shortly after its approval. Ron Orr, chief financial officer, noted that due to the size of the bond issue, it will take five or six years to complete all items on the project lists. Priority will be given to completing building additions to schools to accommodate the enrollment growth Pattonville has experienced.

The first steps in moving forward were taken on May 10 when the school board approved three items during its meeting. S.M Wilson & Company was selected to manage construction on the bond issue, Stifel, Nicolaus & Company was chosen to underwrite the sale of bonds for the measure, and the bid for architectural services for the first package of projects was awarded to Ittner.

For more information on Prop S, go online at bit.ly/PattonvillePropS.